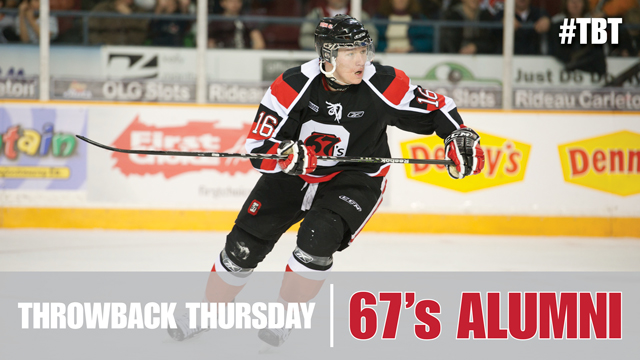 This week we throwback to some former 67’s and take a look at where they are now. Let’s start close to home and check in with two players that have spent the majority of both their junior and pro careers in Ottawa.

Though he’s appeared in the NHL before, Prince officially made the Ottawa Senators roster out of training camp. It’s a big step for Shane, after working hard in the AHL with the Binghampton Sens for the past three years.

With the injury bug hitting the Senators hard early this season, Prince has been added to Ottawa’s first line and now skates alongside Kyle Turris and Mark Stone. Shane has a record of shining on a top line, as he scored 43 goals in 2011-12 with the 67’s playing beside Sean Monahan and Tyler Toffoli. The Orleans, ON native has played his entire hockey career (minus two stops in Owen Sound and Binghampton, NY) in Ottawa. Now in his third season with the NHL’s Senators, Ceci has taken on more responsibility, anchoring Ottawa’s second powerplay unit and playing a large role on their penalty kill as well. Jamie was traded by the Colorado Avalanche to the Sabres over the summer along with forward Ryan O’Reilly. Though he hasn’t come close to his OHL career high in points (89), McGinn has been valuable role player for the past eight seasons in the NHL. He’ll get a chance to excel offensively in Buffalo, as he’s playing beside second overall 2015 draft selection Jack Eichel on the Sabres top powerplay unit. Though Jimmy Howard remains the unofficial starting goaltender in Detroit, Mrazek pushed hard last season and looks to be the Red Wings future number one. He played all seven playoff games for Detroit, and though they lost to the Eastern Conference champion Tampa Bay Lightning, Mrazek managed to post two shutouts in that series. He started 29 games in 2014/15 and should get more starts this season. Campbell, now in his 17th NHL season, last played for the 67’s in the 1999 Memorial Cup. Since then, he’s played for four NHL squads and now skates on the Panthers first defence pair. In Florida, he mentors another former outstanding OHL defenseman, Aaron Ekblad. Ekblad played his entire Ontario Hockey League career with the Barrie Colts and was Florida’s first overall pick in 2014. Skating alongside the likes of Johnathan Toews, Patrick Kane, and Duncan Keith, Bickell has been part of a dynasty-like team in Chicago. He’s a three-time Stanley Cup champ at only 29 years old and continues to be an important piece of an impressive core of Blackhawks. On his way to winning the Stanley Cup in 2013, Bryan scored 17 points in 23 games. After an off-season leadership shake up in San Jose, Couture was awarded the role of assistant captain, with Joe Thornton donning the other “A” and Joe Pavelski wearing the “C”. Logan recorded a NHL career high with 67 points last season. Unfortunately though, Logan suffered a broken fibula early this year and will likely be out for at least a month. After scoring 31 goals and leading Calgary to a postseason berth last year, Monahan is now in his third season with the Flames. At only 21 years old, Sean has quickly evolved into one of the NHL’s top centres. This season he was joined in Calgary by a former OHL East Division rival, Sam Bennett. Fans may remember Bennett, as he played his junior career with the Kingston Frontenacs. Another top-flight former 67, Tyler Toffoli already has seven goals in his first nine games in LA this year. He’s locked down the first line right wing role with the Kings and is playing alongside seasoned NHL vets, Jeff Carter and Milan Lucic. After scoring 23 goals last season, it looks as though Toffoli is developing into one of the league’s top snipers.