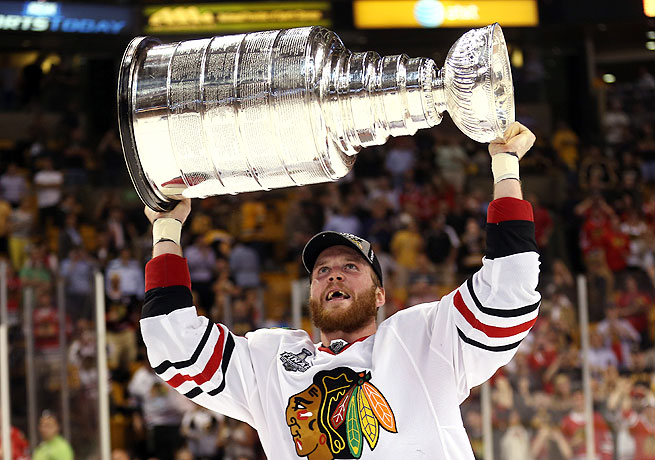 In honour of the Chicago Blackhawks’ game six victory over the Minnesota Wild on Tuesday night, it only seemed fitting to have Ottawa 67’s alumnus and current Blackhawk Bryan Bickell as the focus of this week’s Throwback Thursday.

Bickell, currently in his fourth full season with the Blackhawks, is tied for third place among playoff goal scorers with six goals. He also has three assists for a total of nine points in 12 games.

Bickell is no stranger to playoff success – he played a crucial role in the Blackhawks championship run last season, registering nine goals and eight assists in 23 playoff games. Bickell was rewarded with a four-year 16 million dollar extension on June 30, 2013.

Throughout his junior hockey career with the Ottawa 67’s, Bryan Bickell was known as a very physical player with a scoring touch. With 17 points in 21 games, Bickell helped the 67’s reach the OHL finals in 2005, defeating Barrie, Sudbury, and Peterborough along the way. A loss in the OHL finals to the Memorial Cup host London Knights secured the 67’s a berth in the Memorial Cup. The 67’s won the longest ever game played in the tournament, beating the Kelowna Rockets in double overtime. As a result, Ottawa finished third place in the round-robin before losing to Sidney Crosby and the Rimouski Oceanic in the semi-finals.

Bickell spent three and a half seasons with the 67’s before being traded to the Windsor Spitfires in the 2005-06 season. Bickell finished his career with the 67’s having amassed 157 points in 216 games.