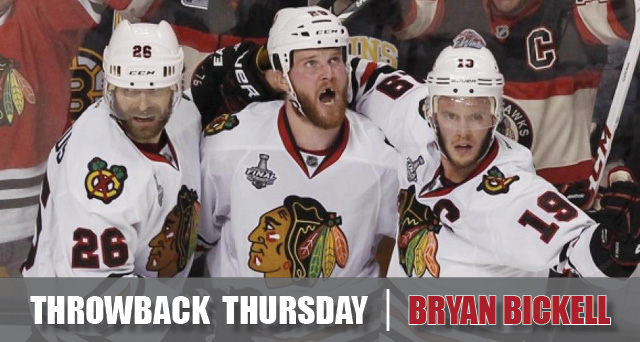 With a combined 54 NHL post-season games played, Bryan Bickell was built for the playoffs.

The Orono, Ontario native started his path to the NHL with the Ottawa 67’s in 2002. With the 67’s, Bickell advanced to the OHL playoffs in three consecutive seasons. His last post-season in Ottawa saw the team go all the way to the 2005 Memorial Cup in London, ON.

Drafted by the Chicago Blackhawks in 2004 was a dream come true for Bryan. The team was rebuilding, but within the next two seasons, it would be completely transformed. Debatably, it would become one of the NHL’s greatest dynasties.

Bickell would bounce back and forth between the AHL and NHL for his first four seasons. He even played four playoff games for the Blackhawks on their run to winning the Stanley Cup in 2010. He was on the ice when the Cup was presented to captain Johnathan Toews and was even able to take it fishing for a day.

That off-season saw the ‘Hawks part ways with a few older players. This was Bickell’s chance to stick with the big club for good. He started the season in Chicago, played 78 games in 2010-11, and never looked back.

Chicago, now an elite NHL team, hadn’t made it back to the Stanley Cup Finals until 2012-13. By that time, Bryan had established himself as a rugged power forward, known for his tenacious net presence. His 6’4”, 223 lbs. frame allows him to compete with the largest of NHL defensemen. Bickell consistently finds himself on Jonathan Toews’ left wing. A position many NHL forwards would take a significant pay-cut to play in.

In the 2012-13 Stanley Cup Finals, Chicago faced off against the always-aggressive Boston Bruins. The Blackhawks had Boston down 3-2 in the best-of-seven series going into Game 6.

With Chicago holding home-ice advantage, the Bruins had to stave off elimination in front of their hometown faithful. Boston had a 2-1 lead with less than two minutes left in third period.

Boston was widely known for their defensive play and holding down leads late into games. Chicago, though, was known for their dynamic offensive attack and did not disappoint. What looked a nothing play along boards turned into the tying goal. Bickell stood his ground in front of the Bruins net and tap in a beauty pass from, who else, Jonathan Toews. This tied the game with just over a minute to go.

Only 17 seconds later, Blackhawks forward Dave Bolland poked in a rebound off the left post. The Bruins were devastated, they were unable to compose themselves and had lost the Stanley Cup in a matter of seconds.

Bickell and Bolland were championed as the heroes of the game. Both will go down as truly great playoff performers, but without Bryan’s tying goal, there is no chance for the winner.