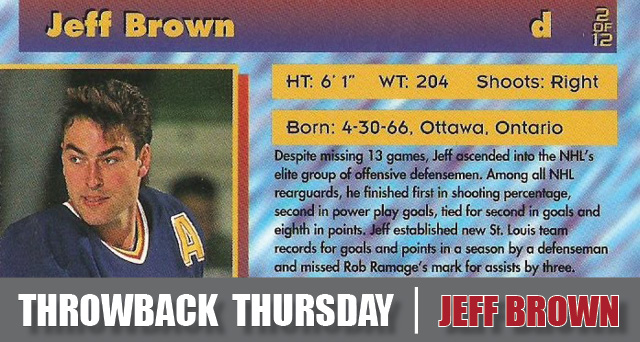 Hockey heroes are born in playoffs. Players can be considered stars solely based on regular season stats, but the real legends earn their lore in the post-season.

The 1994 NHL regular season was nothing spectacular for the Vancouver Canucks. Finishing 7th in the western conference at least guaranteed them a spot in the playoffs and a chance to raise the Stanley Cup. They added a few new faces prior to their post-season run, one in particular would make a long-lasting impression on the franchise and it’s fans.

On March 21, 1994, the Canucks acquired the offensively gifted defensemen Jeff Brown from the St. Louis Blues. Brown was on fire that season, scoring 60 points in 63 games before being traded to Vancouver. His talent in the opposition’s end meshed well with the Canucks’ forwards, especially speedster Pavel Bure.

Affectionately known as the “Russian Rocket”, Pavel had unmatched acceleration and was widely known as the fastest goal scorer in the NHL. Brown had amazing on-ice vision and connected with Bure on breakaway chances many times. One of these chances took place in the 1994 playoffs.

The Canucks first round matchup saw them take on the Pacific Division champions, Calgary Flames. The teams had a great rivalry during this time, as they swapped division titles from year to year. Vancouver came out strong and took the first game on the road 5-0. Brown scored a goal and added an assist in his first playoff game with the team.

The Canucks would lose the next three games, facing elimination with only one home game left. With Game 5 headed to overtime, the Canucks needed to rally to save their season. Geoff Courtnall ripped a snapshot that eluded Flames goaltender Mike Vernon for the game-winner.

Game 6 would need overtime as well, this time it was Canucks captain Trevor Linden who extinguished the Flames in OT. His goal gave Vancouver the chance to complete the comeback and eliminate Calgary from the playoffs.

The Flames would not make it easy though. Regulation time, for third consecutive game, was not enough to settle this series. The first overtime ended in a tie as well.

In the second OT period, a turnover in the neutral zone let defensemen Dave Babych scoop up the puck and send it cross ice to his partner, Jeff Brown. Brown took one look up the ice and saw Pavel Bure streaking into the Flames end.

He sent a beautiful tape-to-tape pass onto Bure’s stick, perfectly timed to put Pavel just onside and ahead of Calgary’s defence. Bure broke through and put on his patented forehand-backhand-forehand deke. He beat Vernon stick-side, sent the Canucks into the second round, and on their way to the eventual Stanley Cup Finals.

Brown’s impact on this play and the continued success of Vancouver in the 1994 Stanley Cup Playoffs was immortalized by Canucks fans. Though he only played 73 games over parts of three seasons with Vancouver, he will go down as a legendary figure in Vancouver Canucks history.