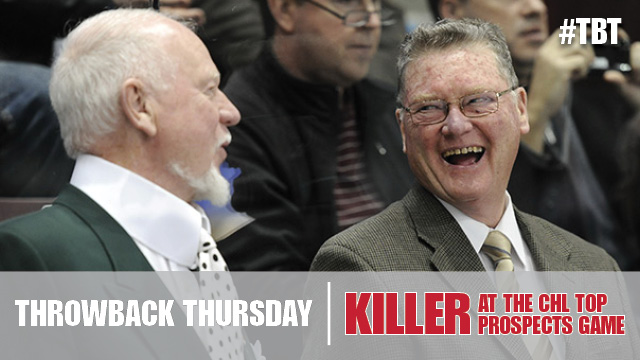 With Brian Kilrea assisting Don Cherry at the 2016 BMO CHL/NHL Top Prospects Game in Vancouver tonight, we throwback to the legendary coach’s time participating in the event.

Kilrea has been behind Team Cherry’s bench 15 times since 1996 and he doesn’t do so alone. His longtime assistant coach Bert O’Brien always accompagnies Brian, and he’ll be right beside Killer tonight as well. The duo of 67’s alumni have great insight into the talent and ablities of young players, making them an irreplaceable addition to Cherry’ staff.

Check out this video of Brian at the 2013 CHL Top Prospects Game in Halifax. Unforntunately for Killer his Team Cherry lost to Team Orr in a rare 3-0 shutout.

The 2016 BMO CHL/NHL Top Prospects Game takes place on Thursday January 28, 2016, at Pacific Coliseum, home of the WHL’s Vancouver Giants. The game will be broadcast live across Canada on Sportsnet, TVA Sports at 9 p.m. ET.