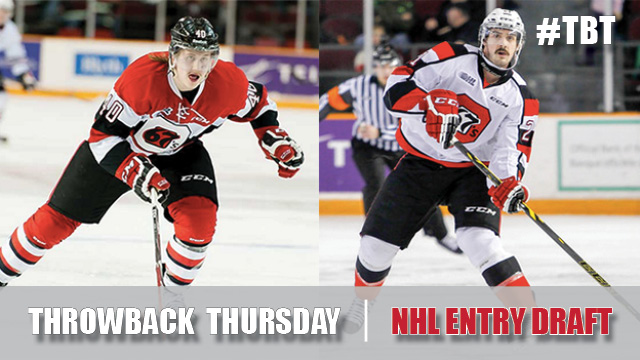 In the third installment of our look back at recent 67’s at the NHL Entry Draft, we examine the two players who were selected by the Los Angeles Kings in 2014.

Defensemen Alex Lintuniemi and Jake Middleton were both drafted by the Kings at the 2014 Draft in Philadelphia, but their individual draft experiences were completely different.

Lintuniemi didn’t have to wait long until he was picked 60th overall in the second round. Kings GM Dean Lombardi knew he was coming from a great junior club, as the executive had drfted former 67’s forward Tyler Toffoli a few years earlier.

Middleton, not even at the draft, was in for a long, stressful evening. Trying to take his mind off it, Jake and a few friends decided to take in a Toronto Blue Jays baseball game.

Round by round, Jake hadn’t heard any news. He was starting to get nervous as the draft came down to the seventh (final) round. Luckily, the Kings swooped in and selected Middleton with the last pick in the draft.

Exhale @MiddzClassy. We got you buddy. The final pick of the #NHLDraft! pic.twitter.com/4qLtgs4yxy