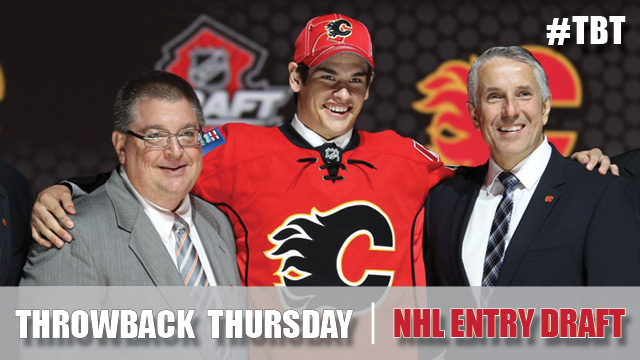 In the second of our three part NHL Entry Draft Throwback Thursday series, we take a look at former 67’s captain Sean Monahan and the events leading up to his draft day.

The gifted centreman only spent three seasons with the Ottawa 67’s, though his OHL points total would suggest otherwise. Monahan scored 203 points in only 185 games in the league.

This display of prolific point production made Sean a hot commodity heading into the 2013 NHL Entry Draft.

He was ranked 6th in the NHL’s final mock draft. And wouldn’t you know it, that’s exactly where he would be drafted.

The Calgary Flames selected Monahan with their highest first round pick since 1998, when they drafted Rico Fata with the 6th overall pick as well. The Flames had just begun rebuilding their team and needed to replace longtime face of the franchise Jarome Iginla, after moving him to Pittsburgh at the trade deadline that season.

Calgary could not have made a better choice in Monahan. By drafting Sean, they acquired a top-line, offensive centre, something they’d been chasing throughout Iginla’s entire tenure with the club.

The last centre to play for the Flames that even compares to Sean was Joe Nieuwendyk. Coincidentally, Nieuwendyk was traded to Dallas for Iginla in 1995, while “Iggy” was still in junior hockey.

Once being drafted by the Flames, Sean never looked back. He started the 2014-15 season in Calgary, as their roster was thin on offence. Flames management debated whether to return the former 67’s star to his junior club, but after his nine game NHL audition Calgary was sold.

Monahan has stayed with the Flames ever since and is steadily evolving into that franchise player the Flames were searching for.