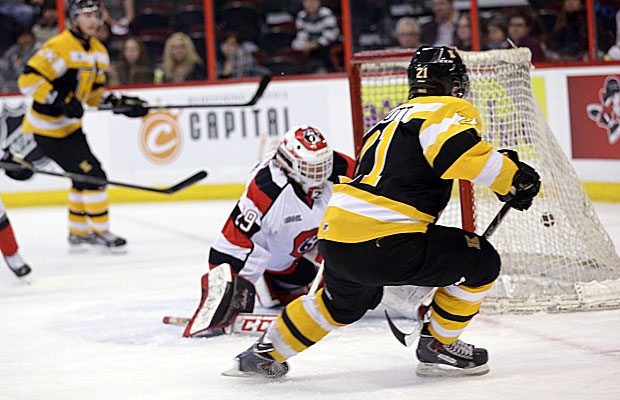 Forward Erik Bradford exited the game late in the opening period after crashing hard into the boards and was taken to hospital for X-rays with a leg injury.

The absence of Bradford, who had 42 points in 25 games with the 67’s since arriving in town at the Ontario Hockey League trade deadline, will provide the 67’s a formidable challenge as the team attempts to secure the eighth and final playoff spot in the Eastern Conference.

With just three games remaining for Ottawa, the 67’s find themselves tied with the Mississauga Steelheads for eighth, one point behind the Niagara IceDogs, who lost in Peterborough on Tuesday.

The 67’s host the Barrie Colts at Canadian Tire Centre on Thursday (7 p.m. faceoff) before completing the regular season on the road in Kingston on Friday and North Bay on Sunday.

In addition to Bradford, Ottawa played a good chunk of the game without forward Ryan Van Stralen and defenceman Troy Henley who were tossed from the contest in the second period following a dust-up in the defensive zone. Henley received a match penalty for a punch he delivered to Kingston’s Mack Lemmon, while Van Stralen was issued an instigator minor, a fighting major, a misconduct and game misconduct for his altercation with Loren Ulett. The penalties gave the Frontenacs, who held a 2-1 lead, a 5-on-3 advantage for a full five minutes.

Kingston wasted no time taking advantage, with Tampa Bay Lightning prospect Henri Ikonen scoring his second goal of the game just 14 seconds after the dismissals of Van Stralen and Henley.

Ryan Kujawinski scored eight minutes into the third to give Kingston a three-goal advantage.

Travis Konecny scored his 25th goal of his rookie season for Ottawa later in the third.

At Thursday’s game, Ottawa Victim Services will be in attendance to accept donations of used cellphones and chargers.

Ottawa Victim Services (OVS) is a community-based agency that provides emotional support, practical assistance, referrals and advocacy to individuals who have been victimized as a result of a crime or tragic circumstance. OVS has over 70 volunteers who are on call 24 hours a day, 7 days a week, 365 days a year. OVS works with many vulnerable people who are experiencing or have recently escaped violence. We help people access services and resources that they need, work with them one on one to develop personal safety plans and when we can, we provide used cell phones to clients in need. Even without a phone plan, a cell phone will still call 911. Many of the phones we give out have been donated to us by concerned members of the public who want to give our clients a means to call 911 in an emergency.