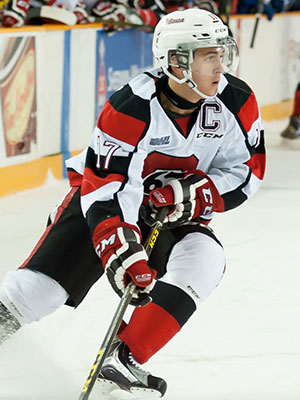 The Ottawa 67’s drafted Travis Konecny with the 1st overall pick in the 2013 OHL Priority Selection by the Ottawa 67’s.

Konecny got off to a hot start to his OHL career averaging a point per game through the first 33 games of the season with 11 goals and 22 assists. As a result of his play, Travis was named to Team Ontario for the World Under-17 Hockey Challenge, as well as receiving the honour of team captain. Team Ontario would finish 5th in the tournament with Konecny scoring one goal and three assists in five games.

Upon returning to the Barber Poles, he continued his successful rookie campaign finishing the season averaging more than a point per game with 70 points (26 G, 44 A) in a total 63 game, a team best. As a result of his play in his debut OHL season, Travis was awarded the Emms Family Award as the OHL’s rookie of the year.

After his rookie seas, Konecny was given the opportunity to represent Team Canada at the Ivan Hlinka U18 tournament, a team featuring other future NHL players including Mitch Marner, Matt Barzal, Lawson Crouse and more. Konecny was awarded the team’s captaincy and captain the team to a gold medal, scoring 6 points in 5 games.

At the start of his second season Travis was named captain again, this time of the Ottawa 67’s. In January 2015, Konecny was named to Team Orr for the CHL-NHL Top Prospects game featuring the Top 40 NHL prospects playing the CHL. Team Orr won the game 6-0 lead by a two goal performance from Konecny.

Konecny finished the season strong, ending up with 68 points in 60 regular season games. The 67’s finished second in the East Division that year but unfortunately bounced in the first round of the playoffs. In five games, Travis scored three goals and seven assists for a total of 10 points, an average of two points per game.

After another strong showing in his second year, Konecny was selected in the 1st round, 24th overall by the Philadelphia Flyers in the 2015 NHL Draft. Travis would not make the Flyers roster that season and returned to the 67’s for what would end up being a busy season.

After another strong showing to start the year, Konecny was named to Team OHL for the 2015 CHL Canada Russia Series. Again being added to the leadership group, Konecny sported an ‘A’ during game three of the series. Konecny was held pointless in the game but Team OHL beat team Russia 3-0.

Konecny would return to the 67’s after the Summit Series only to depart again on World Junior duties in Finland. The 67’s captain registered one goal and one assist in five games, while the team lost in the first round of the playoffs.

After the World Juniors concluded, Konecny’s time would the 67’s would come to an end. Travis was included in a blockbuster trade with the Sarnia Sting that included four players and ten picks. Today, Travis is a member of the Philadelphia Flyers in the NHL, playing in his sophomore season.