Trudeau the hero as 67’s beat Steelheads in shootout 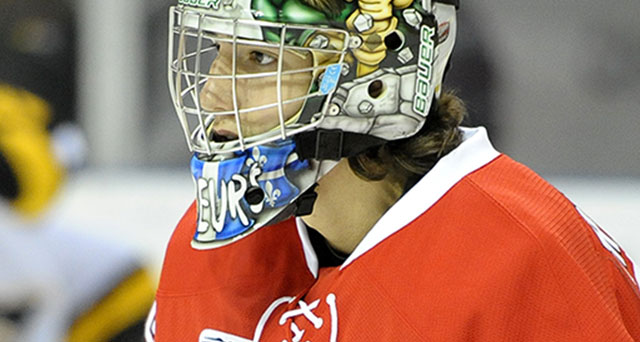 The 20-year-old import from Quebec made 48 saves and did not allow a goal during the shootout as the 67’s beat the Mississauga Steelheads 5-4 in a key Ontario Hockey League match at Canadian Tire Centre.

The victory gave Ottawa a pair of points in the standings and lifted the 67’s into a tie for seventh place with the Steelheads in the league’s Eastern Conference standings.

Both teams are one point ahead of the Niagara IceDogs, which has played one fewer game than Ottawa and Mississauga with less than two weeks remaining in the regular season.

Andrew Goldberg missed on Mississauga’s second chance in the shootout, giving Ottawa the extra point after it had appeared the 67’s would emerge with a win in regulation, only to see a two-goal lead evaporate late in the third on back-to-back goals by Sean Day, including the tying marker with just 72 seconds remaining.

After overtime, Brendan Bell beat Mississauga goalie Spencer Martin on the shootout’s opening chance, a quick snapper that beat the Steelheads goalie low on the blocker side. Trudeau stopped Bryson Cianfrone before 67’s rookie Travis Konecny scored on a backhand to give Ottawa the advantage.

Konency scored twice in regulation – both times on breakaways — and has 24 goals in his remarkable rookie campaign. Dante Salituro also had a pair of goals for the 67’s.

Jared Walsh and Damian Bourne also scored for the Steelheads.

The 67’s board the bus and head down Highway 7 for Peterborough on Saturday to face the Petes. Ottawa is back home at Canadian Tire Centre on Tuesday against the Kingston Frontenacs for a 7 p.m. faceoff.