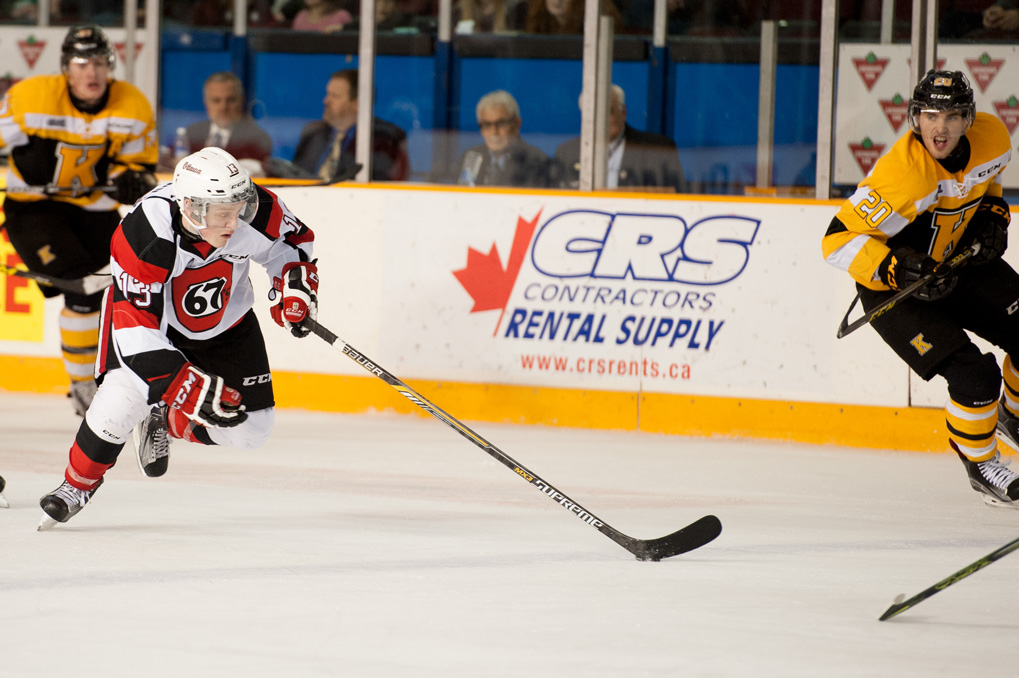 The Ottawa 67’s scored a vital two points Saturday night against the Conference-leading Frontenacs as the race for home-ice advantage in the opening round of the OHL playoffs tightens up. Artur Tyanulin’s first-career hat-trick was completed when the Russian winger scored the overtime winner sending Ottawa past Kingston 5-4.

The win moves the 67’s into fifth spot in the OHL’s Eastern Conference trailing Niagara with three games remaining in the regular season – the next two games come at the Arena at TD Place on March 16 (vs Barrie) and March 18 (vs Hamilton).

Five goals were scored in the opening period that would see the visitors carry a 3-2 lead into the second period. Tyanulin opened the scoring and scored his second goal of the period just 18 seconds after Kingston pulled level. The Frontenacs would again find an equalizer, but Dante Salituro gave Ottawa the edge with his 35th goal of the season.

The second period proved much more tame on the scoring front, but Salituro would again find the back of the net as his 36th tally of the year gave the 67’s a 4-2 lead heading into the final frame.

A pair of third period goals just over two-minutes apart from the Fronts send Saturday night’s affair to overtime.

22 seconds into overtime Tyanulin completed his career-best night scoring his third of the night putting the 67’s in the win column for the third straight game. Tyanulin finished the night with three goals and one assist. Salituro also reached a career milestone Saturday night as his two-goal effort earned him his 79th and 80th points on the season eclipsing his career best of 78 set last season.

The 67’s will continue their battle to claim home ice advantage in the first round of the OHL playoffs when they return home for the first time in two weeks to host the Barrie Colts on March 16 at the Arena at TD Place.