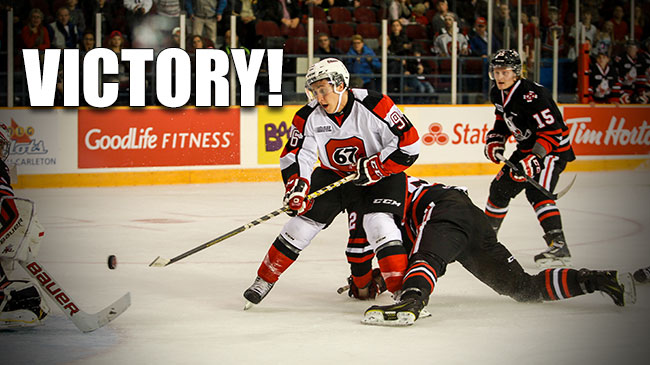 OTTAWA – In the team’s first game back to Lansdowne, the Ottawa 67’s rallied from a two-goal deficit in the final period and secured a victory in dramatic fashion by a 4-3 count over the Niagara IceDogs at TD Place.

Veteran Dante Salituro was the hero of the night, completing a hat trick by scoring the winner with 4:33 remaining in the third.

Salituro also scored the first Ottawa goal at the refurbished arena at TD Place (formerly Civic Centre) as the 67’s won for the first time this season after dropping four games on the road to begin the 2014-15 campaign.

It appeared that the 67’s might be headed for another defeat, trailing 3-1 heading into the final period, but 20-year-old forward Eric Bradford scored five minutes into the third to narrow the gap, then Salituro got his second of the match at 13:29 to tie it, beating Orleans native Brent Moran.

Moran made 24 saves for the IceDogs.

Travis Konecny and Brendan Bell each had two assists for the 67’s.

Ottawa is back on home ice at TD Place on Sunday against the Oshawa Generals at 2 p.m., the first of a home-and-home series that has the teams meeting on Thanksgiving Monday in Oshawa.