Sasha Chmelevski and Tye Felhaber each scored twice as the Ottawa 67’s cruised to their eighth-straight win with a 6-1 decision against the Niagara IceDogs on Saturday night.

Marco Rossi had four assists while Kyle Maksimovich, fresh off scoring the overtime winner on Friday night, and Graeme Clarke, also scored for Ottawa in the win.  Mikey DiPietro made 25 saves to pick up his second win in as many nights.

Jack Studnicka picked up the only goal for Niagara, while Stephen Dhillon made 34 saves in the loss.

The 67’s are back in action starting Thursday when they kick off a stretch of three road games in three days, stopping in Peterborough, Mississauga and Hamilton.

What they’re saying
Andre Tourigny, 67’s head coach
“I’m proud of the boys.  That’s the message we sent after the game, that we’re proud of their urgency, their focus, their desire to win and their desire to battle were through the roof …
Our PK was really solid, I believe we took a lot of energy out of them.  Mikey was really solid, he made key saves at key moments.  We even had a couple of big hits, we hit hard and we were relentless on the fore check, we were good on the breakout and the guys showed a lot of courage in the way they played, so it was a really solid performance.” 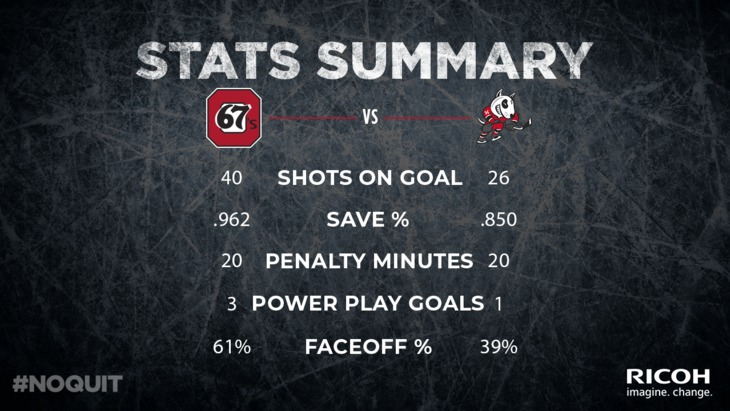