The Ottawa 67’s won the final game of their three-game road trip on Sunday in a big way, with an 8-2 win over the Saginaw Spirit.

Seven different players tickled twine for Ottawa in this one, with Sam Bitten scoring his first of the season.  Austen Keating, Mitchell Hoelscher (twice), Marco Rossi, Sasha Chmelevski, Tye Felhaber and Graeme Clarke were the other goal scorers for the 67’s. It’s the second-straight game the 67’s have scored at least seven goals.

The first period saw Ottawa score six times.  Keating opened the scoring, while Hoelscher, Bitten and Rossi all followed with goals of their own.  Sasha Chmelevski made it a 5-0 game at 16:38 in the period.  Felhaber scored the 6th goal of the first period only 18 seconds later with his 19th of the season.’

Graeme Clarke scored the 67’s seventh goal of the game halfway through the second period with his ninth of the year, his third in the past 24 hours.  Blade Jenkins struck back for the Spirit a few moments later, scoring their first goal of the game.  Both teams would head back to the locker room with Ottawa leading 7-1.

Hayden Davis made it a 7-2 game in the third period, before Hoelscher scored his second goal of the game, which would be the last scored goal on the night.

It is with an OHL-best 14-3-1-0 record that the 67’s will be coming back home this week to face the Kingston Frontenacs on Wednesday at 11 a.m. for the annual School Day Game at the Arena at TD Place. 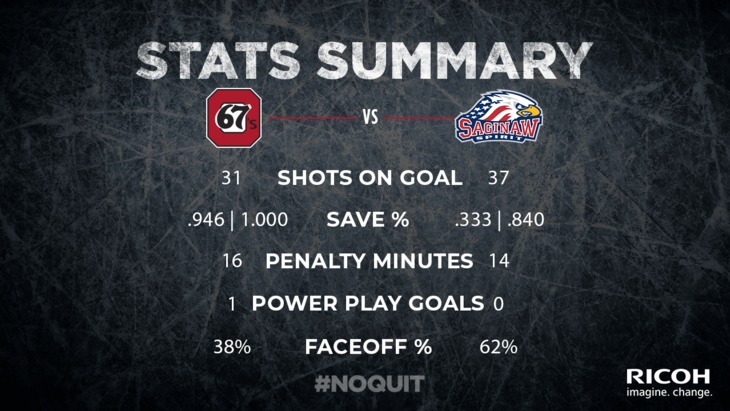