67’s close out weekend with 3-1 win over Mississauga

The Ottawa 67’s got back into the win column on Sunday afternoon, closing out this road trip with a 3-1 win over the Mississauga Steelheads.

The victory gives the 67’s wins in seven of their last eight games and at least a point in eight-straight, the only hiccup coming by way of an overtime loss on Saturday.

Tye Felhaber continued his impressive start to the season with a pair of goals, his 14th and 15th of the campaign in just 14 games. His goals book-ended another score by rookie phenom Marco Rossi, whose nine goals have all come in the last eight games. The Austrian forward has only failed to find the back of the net in one of those games.

67’s goalie Cedrik Andree improved to 8-2 on the season while turning away 31 Steelheads shots. Only Mississauga’s Ryan McLeod, with his second of the year, was able to beat the Ottawa netminder.

The 10-3-1 Barber Poles remain atop the OHL standings with 21 points. 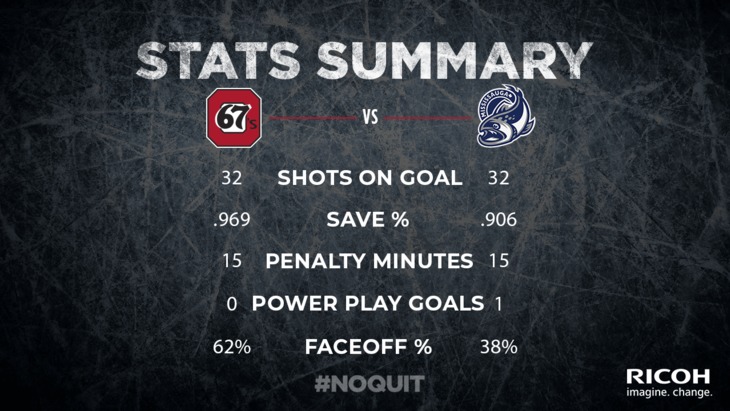 Ottawa’s next game comes at home on October 26 when the 67’s host the London Knights for Friday Night Live!

Tickets for all upcoming home games are available at www.ottawa67s.com.