67’s fall to Rangers in Kitchener

The Ottawa 67’s outshot the opposition on Friday but ultimately lost their first game of a three-in-three weekend on Friday night, dropping a 5-1 decision on the road against the Kitchener Rangers.

After a scoreless first period, the Rangers lit the lamp in the opening minutes of the second period courtesy of Yantsis.  McHugh would add to his team’s lead less than a minute later.  Kitchener would go on to score two more goals in the second period to head into the second intermission up 4-0.

Bahl put the 67’s on the board five minutes into the third period before former 67 Chase Campbell made it 5-1 with four minutes left in the game.  Ottawa outshot the Rangers 32-26 over 60 minutes.

The Barber Poles will look to bounce back on Saturday night as their first road trip of the season sends them to Owen Sound before the 67’s close out the weekend in Hamilton on Sunday afternoon. 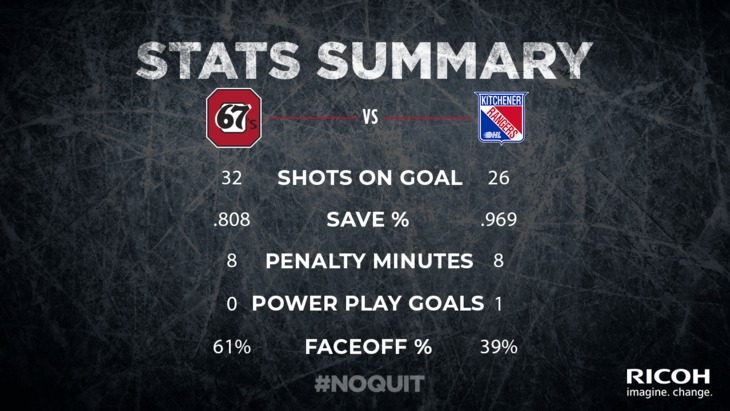