The Ottawa 67’s followed up an overtime loss from the night before with a decisive 4-2 win over the Barrie Colts on Saturday night.

Austen Keating had a pair of goals for the 67’s, while Kody Clark and Sam Bitten also scored in the win, Ottawa’s second win over Barrie in as many games this year. Jason Willms and Lucas Chiodo were the goal scorers for the Colts.

Clark was the lone scorer of the opening period, scoring at 10:27 with the setup from Sasha Chmelevski. Keating jammed in a rebound late in the second to give his team a two-goal lead before Willms cut the 67’s lead in half with less than a second remaining on the board.

Halfway through the third period, Chmelevski broke away, nearly scoring, but Bitten was there to tuck in his rebound to make it 3-1.  It seemed like Ottawa was to coast to a victory before Chiodo made things interesting by making it a one goal game with just about two minutes left. Keating would ice this one with an empty-net goal.

The Barber Poles, who have points in 16-straight games (14 of them wins) will be back in action on Thursday, November 15th, when they will be visiting the Sudbury Wolves. 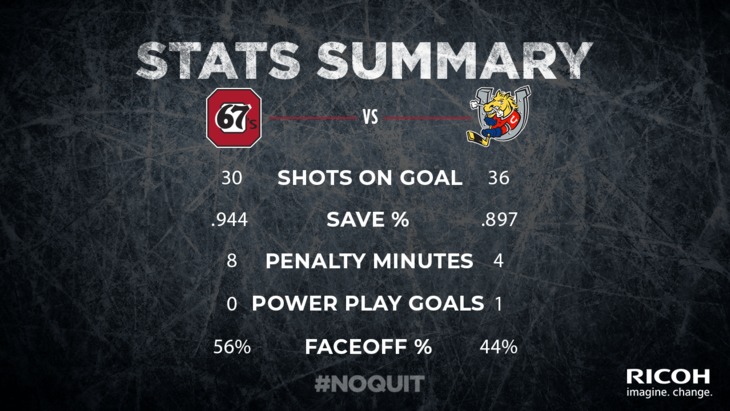