The Ottawa 67’s saw their six-game winning streak come to an end on Saturday but picked up another big point in a 3-2 overtime loss to the Erie Otters on the road.

Ottawa was leading until the dying minutes of the third period before Erie rallied back with a late-game tying goal and an overtime goal coming from the stick of captain Kyle Maksimovich.  Tye Felhaber and Marco Rossi scored for the Barber Poles, who remain atop of the OHL standings with 18 points.

Following a scoreless first period, Felhaber opened the scoring late in the second period with a second shorthanded goal in as many games.  Felhaber’s 13th of the season extended his current point streak to 10 games, in which he has put up 17 points.

Ottawa increased their lead just over a minute into the third period, with Felhaber feeding Rossi, who found the back of the net with a slick finish.  Brendan Hoffmann answered right back for the Otters with his first of the season.  Danial Singer would go on to tie it up with 2:27 left in the game.

The the action-packed 3-on-3 overtime did not disappoint, but ended up going in favor of the hosts, when rookie defenseman Jamie Drysdale set up Maksimovich for his 8th of the season.

The Barber Poles round out their three-game road trip in Mississauga tomorrow afternoon, with a 2:00 PM faceoff at the Paramount Fine Foods Centre. 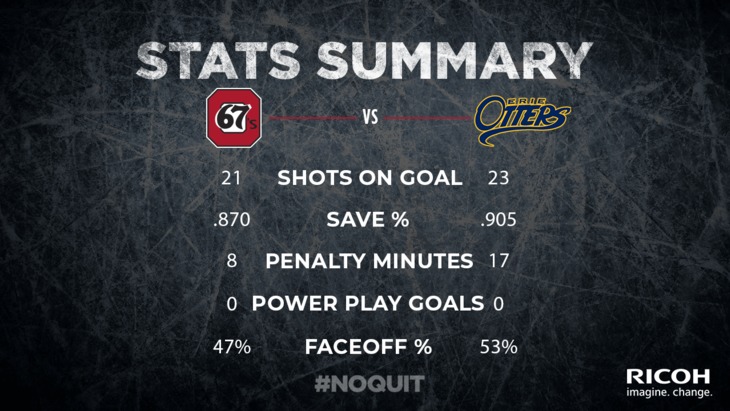 Ottawa’s next home is October 26 when the 67’s host the London Knights for Friday Night Live!

Tickets for all upcoming home games are available at www.ottawa67s.com.