The Ottawa 67’s closed out a perfect road trip that saw them play three games in as many days on Sunday afternoon, after defeating the Hamilton Bulldogs by a score of 7-4.  Jack Quinn, Noel Hoefenmayer, Joseph Garreffa (twice), Quinn Yule, Mitch Hoelscher and Yanic Crete were the goal scorers for Ottawa, while Will Cranley earned the win in nets for the Barber Poles.

The Bulldogs struck first early in this game with a goal by Jan Jenik at 4:04, but it was quickly answered by the visitors when Quinn put one up top on the power play two and a half minutes later.  Hoefenmayer and Garreffa each added a goal before the first period ended, giving Ottawa a 3-1 lead.

Hamilton’s Tag Bertuzzi made it a one goal game five minutes into the second period, but Quinn Yule and Mitch Hoelscher both scored late into the second to give the 67’s a three goal edge heading into the final frame.  Alec Bélanger collected the primary assist on both of Ottawa’s second period goals.

Just like they did in both periods thus far in the game at that point, the Bulldogs were the first ones to score in the third and final period, thanks to a very early goals from Jan Jenik in the opening minute.  Yanic Crete would however quickly answer back with his second of the season, after he had scored his first career OHL goal two nights ago.  Arthur Kaliyev would add another one for the Bulldogs before the score was completed by the 67’s Joseph Garreffa with his second of the game, making it a final of 7-4 for Ottawa.

This win made it a perfect three for three road trip, as well as six wins in a row for Andre Tourigny’s squad.  The Barber Poles will be back on home ice this upcoming Friday, November 8th, when they receive the Oshawa Generals for a clash of two of the top teams in the East, and for the occasion, it’ll be the second Toonie Beer Night of the season for the 67’s and their fans. 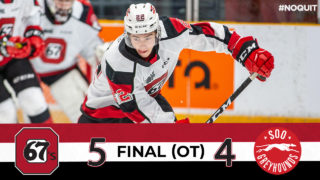 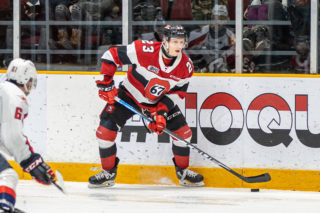 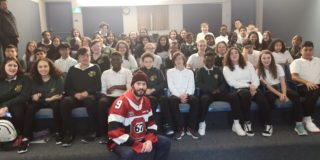 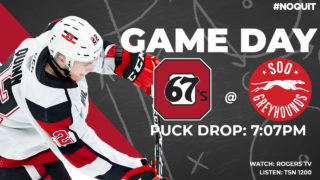 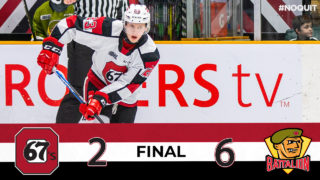