It was against a rested Saginaw Spirit that the Ottawa 67’s played the final game of a three in three weekend, on Military Appreciation day, in a game that ended 5-3 in favour of the Barber Poles. Lucas Chiodo, Tye Felhaber, Sasha Chmelevski, birthday boy Mitchell Hoelscher and Marco Rossi all scored for Ottawa, while Cedrick Andree made 33 saves in his second consecutive start.

The Spirit came out flying opening the score at 2:52 in the first period. Lucas Chiodo would tie things up in the dying minutes of the period, finishing off a sweet setup from Hudson Wilson to send both teams to the locker rooms with a tied score of 1-1.

The second period was held scoreless by the solid play of both goaltenders Cedrick Andree and Ivan Prosvetov. After two periods, Andree had stopped 23 of the 24 shots Saginaw had thrown on net.

A day after hitting the 50 goal mark, Tye Felhaber stayed hot, finding the back of the net on the power play for his 51st goal in 48 games. Chmelevski, Hoelscher and Rossi would all join the party with goals of their own before Saginaw finished the game off strong with two quick goals from Ryan McLeod and Cole Coskey near the end of the game. But it was too little too late for the visitors.

After this win, the Barber Poles have now won their past five games and eight out of their last ten, which has helped them keep a four-point lead over the London Knights in the overall OHL standings. The 67’s will be back on the ice as soon as Wednesday when the Kingston Frontenacs will be visiting The Arena at TD Place to face the 67’s at 7:00 PM.

What they’re saying
André Tourigny
On beating a rested Saginaw team….“I’m impressed by our guys and their fitness and their courage. Often, it’s not just about being in shape, but also mentally, you can be as in shape as you want, you can also get tired mentally. Our guys had no quit and they went into that game with a lot of passion and a lot of courage and I’m really proud of that.”

Mitchell Hoelscher
On scoring a goal on his 19th birthday…“It’s a great start to being 19 years old, but most importantly, the two points is even better.”

On the team’s depth… “I think we’re really starting to get great chemistry with the new guys [Maksimovich and Chiodo].  We’re really getting the ball rolling and that’s what we try and do, which is grinding others teams and outworking them with four solid lines and I think that’s exactly what we did today.”

On facing 35+ shots for the second game in a row…  “You just get to that point where after you face a lot of shots you get locked in.”

Kyle Maksimovich now has 7 points in his last 3 games. 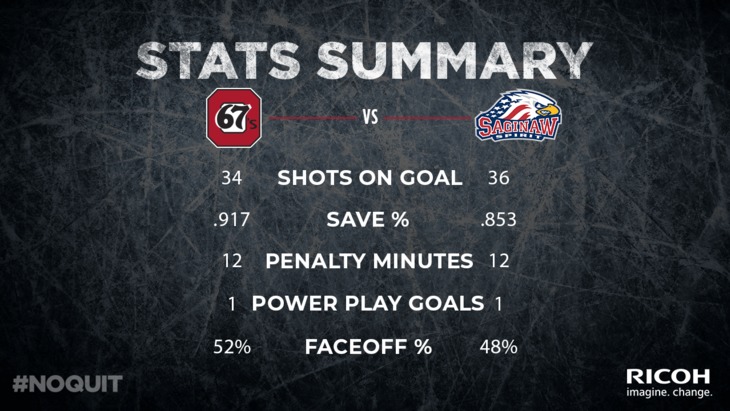