With a packed house and the loudest crowd of the year on hand Wednesday morning at the Arena at TD Place, the Ottawa 67’s fed off the energy of the annual School Day Game, defeating the Kingston Frontenacs 6-4.

Tye Felhaber continued his impressive start to the year with a pair of goals and an, while rookie Marco Rossi also chipped in three points with a goal and two helpers.

Graeme Clarke, Kevin Bahl and Quinn Yule were the other goal-scorers for Ottawa, while Jason Robertson had a hat trick for Kingston and Brett Neumann added the Frontenacs other goal.

It didn’t take long for the thousands of schoolkids in attendance to get loud as Felhaber opened the scoring at 5:34 of the first period, as the veteran Barber Pole scored his 20th of the year before scoring his second of the game just five minutes later.

Kingston’s Jason Robertson and Brett Neumann would score to tie the game up before the end the first.

Robertson gave his team a 3-2 lead 3:17 into the second with another power play goal for Kingston, though the 67’s answered back with three unanswered goals before the end of the second, courtesy of of Bahl, Rossi and Yule.

Clarke would score for Ottawa just 30 seconds into the third period before Jason Robertson made it 6-4 with eight minutes left.

André Tourigny, 67’s Head Coach
‘’I think we played a great game at five on five… (It was) was a really good performance from our guys.  I like the fact that they stayed humble and kept going hard.  Even when the game got a little bit chippy, we never lost our focus so, great performance from the guys.’’

Tye Felhaber, 67’s forward
‘’I think we’re a very poised team.  Even though we’re young, we stay composed.  When they took the lead, we just took a breath on the bench and figured that if we stuck to the game plan good things would happen and that’s exactly what we did.’’


Sam Bitten, 67’s forward
‘’It’s pretty cool, it’s not every day where we can play in front of 5,000 screaming fans, we have this game circled on the calendar every year and I think we lived up to the standards.  It was a lot of fun and it’s always good to get a win for the kids.’’ 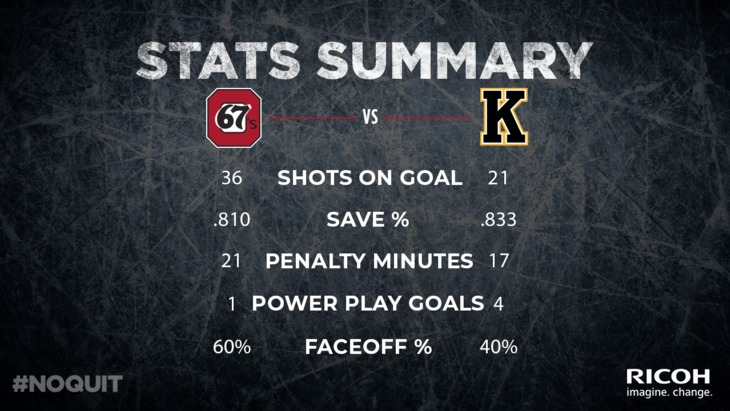