The Ottawa 67’s kicked off their 2019 schedule with a bang, defeating the Barrie Colts 2-0 at The Arena at TD Place on Saturday afternoon.

Noel Hoefenmayer and Tye Felhaber scored for Ottawa, while Cedrick Andree stopped 17 shots for his second shutout of the season.

This one remained scoreless through the first period and much of the second before Hoefenmayer extended his point streak to four games with a goal set up by the most productive duo in the OHL, Austen Keating and Tye Felhaber.

Both goalies would remain solid for the remainder of the third period and Hoefenmayer’s goal stood as the winner.  Felhaber would seal the deal with 15 seconds left on the clock, with an empty net goal (his 43rd this year) set up by Keating.

What they’re saying
André Tourigny, Head Coach
On the overall effort…. ’’I feel that we played really solid defensively without the puck, but for sure offensively I feel that we need to get a little bit better cohesion and more support.  There’s always a few things, but whenever you only allow 17 shots, you can’t complain.’’ On the Keating-Rossi-Felhaber line being put back together…. ‘’They were really excited to be back together, I think they like to play with each other and they have a great chemistry, so it was great to see that.’’

Noel Hoefenmayer, 67’s defence
On the close score…. ‘’We needed to learn how to win tight games and close them out’’


Marco Rossi, 67’s forward
On coming back into the lineup…‘’It was a long two months, I couldn’t wait to come back, so I was obviously very happy to play today.’’ On his time off…. ‘’I wasn’t patient at all, I was always thinking about how much I wanted to play, but you have to trust the process and be patient.  Now I’m fully recovered and that’s why I played today.  The first game is always hard but I feel like I did pretty well.’’ 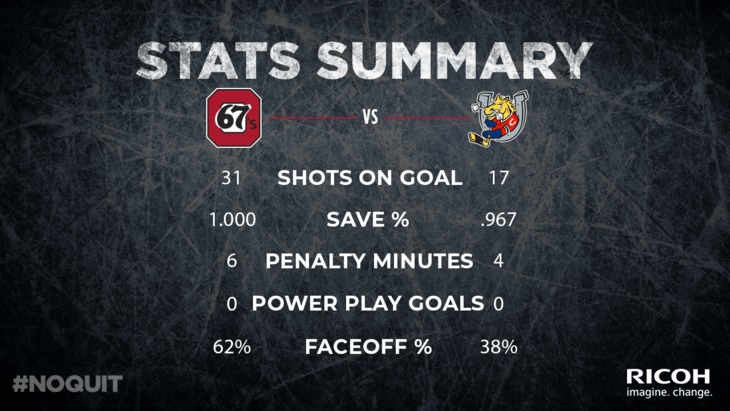