The Ottawa 67’s kicked off a two-game Thanksgiving home stand in style on Saturday as the club rode two-goal performances by Kody Clark and rookie Marco Rossi to a 4-3 win over the Barrie Colts.

Clark’s second of the game with less than five minutes to go in the third stood as the winner as the Barber Poles improved their early-season record to 4-3.

Rossi scored his first and second career OHL goals in this one, the first giving Ottawa the lead late in the first period and the second restoring his team’s one-goal advantage in the middle frame.

Kody Clark, with his first of the year and of the game, tied it up for the 67’s in the first period after Barrie’s Ben Hawerchuck opened the scoring. Rossi’s first pulled Ottawa ahead until Lucas Chiodo evened the score once again.

A shorthanded goal by Matej Pekar in the third period again tied things up for the Colts, but Clark’s second put Ottawa back on top of the back-and-forth affair.

Cedrik Andree finished with 33 saves to earn the win for the 67’s, while Barrie counterpart Maksim Zhukov turned away 32 Ottawa shots.

The 67’s are back in action at home on Sunday afternoon as they host the Sault Ste. Marie Greyhounds at 2 p.m. at the Arena at TD Place.

WHAT THEY’RE SAYING
Andre Tourigny, 67’s Head Coach & VP, Hockey Operations
“Today was our fifth game in eight days so I’m really proud about the way we worked. The effort was fantastic, I’m happy with the way the guys worked. We played a solid game.”

Marco Rossi, 67’s forward
“I’m happy, I had a few chances in the other games but I’m happy to get that first goal. After I scored that first one I felt like I didn’t have that same pressure on me.” 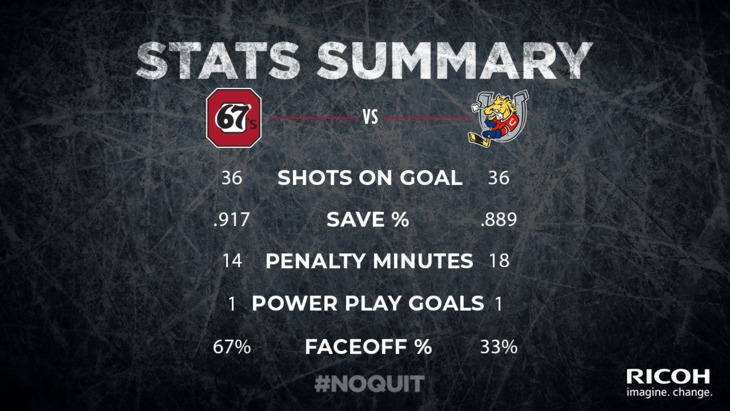