Playing in their second game in 24 hours, the Ottawa 67’s lost their final contest of 2018 by a score of 6-5 to the Niagara IceDogs. Graeme Clarke, Tye Felhaber (twice) and Cameron Tolnai were the goal scorers for the Barber Poles, while five different players found the back of the net for Niagara.

The IceDogs scored two back to back goals thirty seconds apart early in the first period, both tallies coming from the stick of Oliver Castleman.

Graeme Clarke put Ottawa on the board 48 seconds into the second period on the power play, before Niagara re-upped their lead less than three minutes later thanks to a goal on the man advantage of their own, scored by Matthew Philip.  Andrew Bruder and Akil Thomas would both beat Cedrick Andree before going back to the dressing rooms with Niagara leading 5-1.

Just when Niagara seemed to be running away with a dominating win against the OHL’s top team, Tye Felhaber scored two quick goals to start off the third period, making things interesting for the Barber Poles. Those two goals would be his 40th and 41st of the season, a league best. With just over 18 minutes left, the IceDogs would find themselves with only a two-goal lead. Kirill Maksimov added a 6th goal for the IceDogs, giving them a three-goal advantage once again halfway through the final frame. After scoring his first career OHL goal a few days prior against the same IceDogs, Cameron Tolnai added his second of the season following Maksimov’s goal, cutting Niagara’s lead to two goals. Tye Felhaber would complete his hat trick late in the game when he made it 6-5, but it would be too little too late for the 67’s, as the game would end with that very same final score.

This closes out the 67’s 2018 calendar year schedule. The Barber Poles will hit the ice for the very first time in 2019 at home when they will host the Barrie Colts on Saturday, January 5th at The Arena at TD Place. 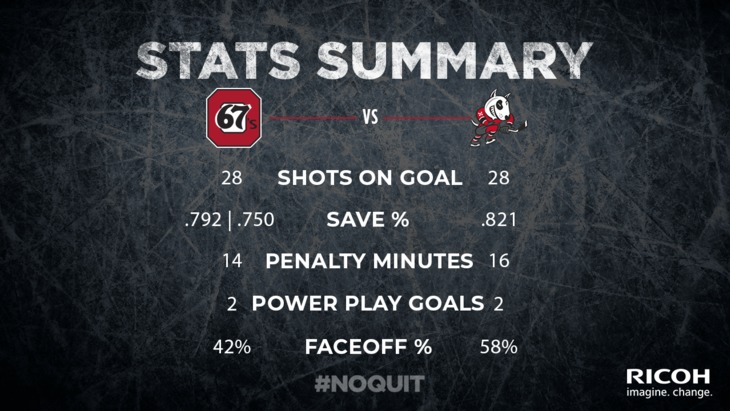