The Ottawa 67’s fed off an extra boost from the REDBLACKS on Sunday as the Barber Poles cruised to their fifth-straight win with a 5-3 decision over the Erie Otters.

The game featured the first-ever RNation Takeover with the 67’s sporting REDBLACKS-inspired jerseys for the occasion. The club looked great on the ice and played even better, led by a Gordie Howe Hat Trick for Tye Felhaber (1 goal, 1 assist, 1 fight) an three-assist outing for Austen Keating.

Marco Rossi, with a diving highlight-reel goal to give the Austrian rookie seven goals in his last five games, and Sasha Chmelevski, with his third goal in as many games, also scored for the 67’s. Graeme Clarke got the 67’s on the board with his fourth of the year early in the first period.

Kyle Maksimovich, with two, and Alex Gritz, scored for the Otters.

Will Cranley, making his first start at home for the 67’s, turned away 26 shots to pick up the win. Erie’s Daniel Murphy was made 33 saves in the loss.

André Tourigny, 67’s Head Coach
‘’I like the way we played today.  We had the puck a lot. We made mistakes with the puck, but there was no play where I couldn’t understand what we were trying to do.  We had the right thought process and we tried to do the right things. I like the effort of our guys.’’

Austen Keating, 67’s forward
“I think what’s maing us so successful is our defensive game has gotten a lot stronger from last year.”

Tye Felhaber, 67’s forward
‘’I think that this is our best overall team win.  All four lines were going, there was a couple bad bounces and I don’t think that the final score reflects on how well we played, but I really do feel like we came together closer as a team.”

LOOKING AHEAD
Next up for the 67’s is a three-game road trip that will see them visit Niagara (Thursday, October 18), Erie (Saturday, September 20) and Mississauga (Sunday, September 21). Ottawa’s next home is October 26 when the 67’s host the London Knights for Friday Night Live! 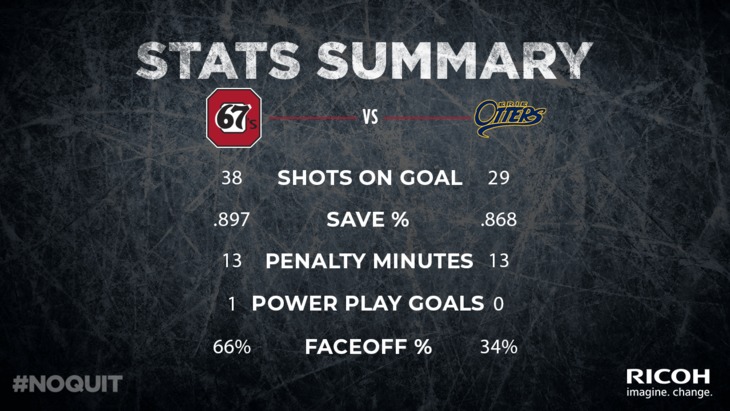