The Ottawa 67’s made it six straight wins when they closed out a perfect two-win weekend in under 24 hours, defeating the North Bay Battalion by a score of 8-0 following a 6-0 victory over the Barrie Colts the night before.  Jack Quinn (50, 51), Daylon Groulx (16), Noel Hoefenmayer (24, 25), Mitch Hoelscher (34), Marco Rossi (38) and Teddy Sawyer were the goal scorers for Ottawa in their 49th win this season.

Jack Quinn was the only player to find the back of the net in the first period, as he reached the 50-goal mark with his first of the game, making him the second player in the OHL to do so this season.  Quinn did not wait long to make it 51, as he would make it 2-0 67’s before the ending of the opening period. Quinn is the 10th #CHL player in 20 yrs to score 50 in his #NHLDraft season following OHL talents Kaliyev, DeBrincat, Skinner, Tavares, Stamkos, Kane, plus Mantha, Crosby, Lupul.

Ottawa still had fresh in their memories the recent 6-2 loss they had to the Battalion, and made sure in the second that the outcome would be opposite from last time, scoring a total of four goals in the second to make it a 6-0 game after 40.  Daylon Groulx made it 3-0 with his 16th, before Noel Hoefenmayer went on to score goals number 25 and 26 on the season, including one on the power play.  Mitch Hoelscher concluded the scoring in the second with a shorthanded goal.

The 8-0 final was completed by Marco Rossi and rookie Teddy Sawyer in the third, making it a combined score of 16-0 for the 67’s over their two game road trip this weekend.  Cedrick Andree shut out Barrie on Saturday night, while Will Cranley made 19 stops on Sunday afternoon to give him his fourth shutout of the season.

Ottawa will look to make it seven straight wins as soon as Tuesday evening inside The Arena at TD Place, when they will host the Niagara IceDogs at 7:00 PM. 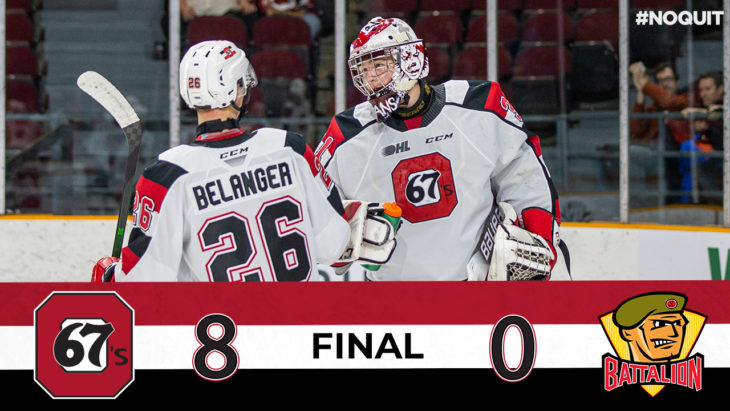