The Ottawa 67’s collected their ninth consecutive win on Super Bowl Sunday, by defeating the Soo Greyhounds by a score of 5-2, in a game where 67’s overage forward Austen Keating collected his 300th OHL point.  Keating, Jack Quinn (twice), Noel Hoefenmayer and Marco Rossi were the goal scorers for Ottawa, while Cedrick Andree was stellar, making 36 saves for his OHL-leading 27th win of the campaign.

Austen Keating opened the game’s scoring by tipping in a Jack Quinn shot past Nick Malik for his 23rd of the season, giving Ottawa a 1-0 that would last until the first intermission.  Despite leading 1-0 after the period, Ottawa was outshot 11-8 by the Greyhounds, but Cedrick Andree was solid in the first, just like he was throughout the game.

Both teams split a goal apiece during the second twenty, as Soo’s Zack Trott tied things up at 11:10 of the second, after the 67’s had the Greyhounds stuck in their zone for a fair amount of time, gathering scoring opportunities, the visitors were able to counter and break away two players against none, which left Andree with little to no chance.  The two teams wouldn’t be all tied up for long, though, as it only took 38 seconds for Jack Quinn to reply and re-give the 67’s the lead, thanks to his OHL leading 40th of the season.

As they have made a reputation for, the Barber Poles came out flying in the third period.  Noel Hoefenmayer blasted a power play one timer in the back of the net to give the hosts a 3-1 edge around the halfway point of the third.  Ottawa would find themselves defending in the third, as the Greyhounds put the pressure on by outshooting them 15-7 in the third, but Andree stood tall and secured the win for his team.  Marco Rossi went on to score his 30th in an empty net with around two minutes left, followed by another empty netter from Jack Quinn with just over 30 seconds left, which was assisted by Keating, giving him 300 points in his OHL career.  The Hounds would not stop battling though, as they got one back with fifteen seconds remaining in the game, giving it a final score of 5-2 in favour of Ottawa.

The 67’s will return to action this upcoming week-end, as they have three games in three days on the menu from Friday to Sunday; they’ll be on the road on Friday to face the Hamilton Bulldogs once again, before they travel to Peterborough the very next day to face the Petes.  Ottawa will round out their week-end at home on Sunday afternoon, when they host the North Bay Battalion at 2:00 PM inside The Arena at TD Place.

“The Soo has been playing some good hockey lately and we could see it today.  They play fast, they put a lot of pressure on the puck carrier, they play with a lot of skill and speed but we knew it would be a good game and I like the way we fought.  We played well with and without the puck, Ceddy made key saves, their goalie was really good as well.  All in all, it was a really good game.”

“It’s a great accomplishment.  That was never something that I had set out to do when I first got here as a sixteen year old, I just wanted to play the best hockey that I can and I think that it all comes down to the great linemates I’ve had in the past five years.  If I look up and down, every guy is either playing pro or doing well for themselves, so, a lot of that comes to them.  Especially in my first year, Dante Salituro and Jeremiah Addison, I had a great time with them and they showed me how to play the game right and a lot of credit comes back to them.”

“I think my first two years, I was more of just an offensive player, before coach André and the rest of the staff came in, I was more worried about points and when they came in they showed me that defense comes first and that if I do those things right, the offense will come.” 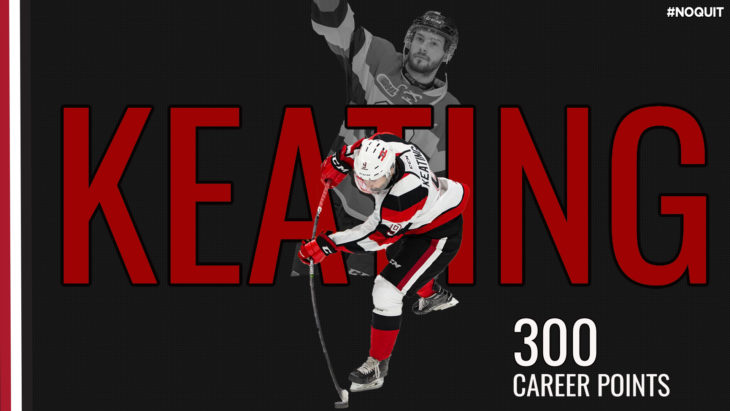