League scoring leaders, newcomers and rookies all contributed on Friday night as the 67’s kicked off a weekend road trip with a decisive 10-2 win over the Sarnia Sting.

Tye Felhaber scored twice – his 45th and 46th goals of the season – and Noel Hoefenmayer, Austen Keating, Sam Bitten, Marco Rossi, Quinn Yule, Graeme Clarke, Mitch Hoelscher and Lucas Chiodo all scored in the offensive outburst. It was Chiodo’s first goal in his first game as a 67 since being acquired by Ottawa before this week’s OHL trade deadline. Keating, Rossi, Bitten, and Kody Clark each had a pair of assists.

The game stayed closed through the first period as both Ottawa and Sarnia scored twice. But the final 40 minutes were dominated by the 67’s, who scored eight unanswered goals to secure the win.

Ottawa’s three-in-three road trip carries on Saturday afternoon, when the 67’s will face the London Knights in a game broadcast nationally on Sportsnet. 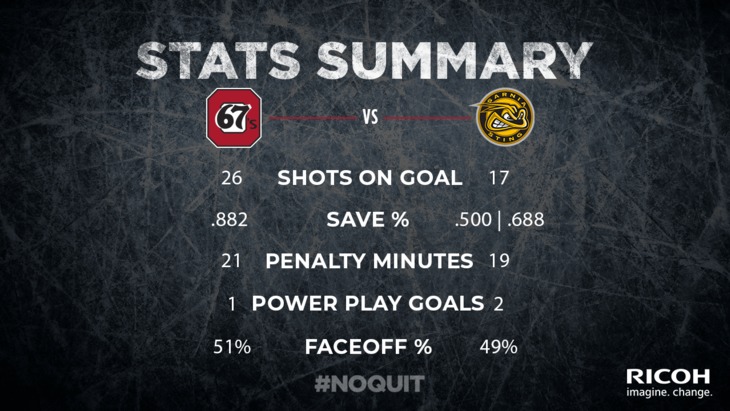