The Ottawa 67’s came out of their holiday break in style on Friday afternoon with a 4-1 win over the Niagara IceDogs at The Arena at TD Place.

After a scoreless first twenty minutes, Tolnai, Ottawa’s first-round selection in 2018, scored his first-ever Major Junior goal to get his team on the board.

Early in the third, Philip Tomasino tied things up with his 15th of the year, seemingly giving a much needed boost to the IceDogs. But the always-dangerous Felhaber would immediately give the Barber Poles the lead once again, with his 39th of the season, only 26 seconds later. Hoefenmayer and Kody Clark both added a goal each before the end of the game to clinch the victory.

What they’re saying
André Tourigny, Head Coach
On responding to Niagara’s tying goal – ‘’I like our guys’ focus.  They really focus on what they have to do and they believe in themselves, they know we can come back.  It’s funny, my son has played with us for the last two weeks and we were talking during the Christmas break and he said: ‘’Dad, that team is unbelievable, they’re trailing after two periods and they’re in the room thinking that they will win’’, and I believe this is one of our biggest strengths.’’


Tye Felhaber, forward
On Cameron Tolnai’s first goal – ‘For Cam to get his first goal, that’s huge.  He’s deserved it, he’s worked really hard. He’s been contributing in all three zones and making everyone around him better, so it was really nice to see.’’
Cameron Tolnai, forward
On scoring his first OHL goal – ‘’Finally… it was pretty nice to get the first one, Sam Bitten made a great play and I just had to put the puck on net.  It was crazy, once I scored everyone was yelling and screaming and to hear the fans care so much about the team and about me scoring the first goal was really nice.’’ 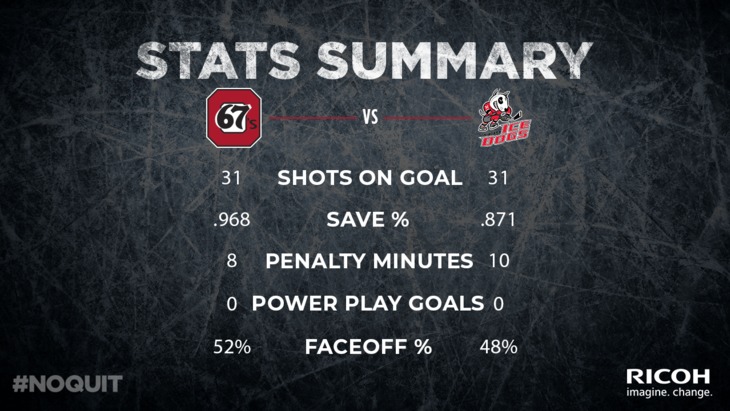