The Ottawa 67’s stretched their current winning streak to five games on Saturday afternoon, thanks to a convincing  – victory against the Niagara IceDogs, their second in as many games this season when facing the Dogs.  Joe Garreffa, Daylon Groulx and Noel Hoefenmayer were the goal scorers for Ottawa in what was their 35th win this season, in only 42 games played.

67’s overage forward Joseph Garreffa opened the game’s scoring early on in the first period by tipping a Nikita Okhotyuk shot from the point past IceDogs goaltender Christian Sbaraglia.  The Barber Poles power play would then go on to score two goals before the end of the opening twenty minutes; Daylon Groulx completed a great play set up by Kevin Bahl and Mitch Hoelscher, before Noel Hoefenmayer made it 3-0 late in the period thanks to his trademark one-timer, allowing him to celebrate a goal in front of over 20 family members that made the trip to see him play.

Will Cranley was called upon during the second period, one in which he made a total of 16 saves to maintain the 67’s 3-0 lead after forty minutes, in what was a goalless second period.

Ottawa would repeat exactly what they did in the opening frame, by winning that period 3-0.  Alec Belanger had the first one of the period, his 8th of the season, before Noel Hoefenmayer collected his second of the game less than a minute later.  Mitch Hoelscher was the last player to score a goal in this game, making it a final of 6-0 Ottawa halfway through the third.

The 67’s will be back in action Sunday afternoon, when they host the Saginaw Spirit at 2:00 PM inside The Arena at TD Place, as they’ll be looking to make it six wins in a row.

“I think Will (Cranley) made a lot of key saves on breakaways, two on ones, he bailed us out a few times.  First period we had a lot of power plays, but I like the way we played in the third period. We were solid, we had more possession time and we were on the right side of the puck, so I really liked the third period.  The second period could’ve hurt us if Will hadn’t had been on top of his game.”

About Will Cranley… “We always knew the talent was there with Will.  He had a tough start but we knew it was a matter of time and I think Charlie McTavish has been doing a fantastic job with him and Will never stopped working really hard and always kept a positive attitude.”

“Every team is a competitive team in this league, there’s no easy games.  I think today we started off pretty good, we let off a bit in the second period and we weren’t playing the way we wanted to, but I think in the third we got back to what we were doing and played the right way.” 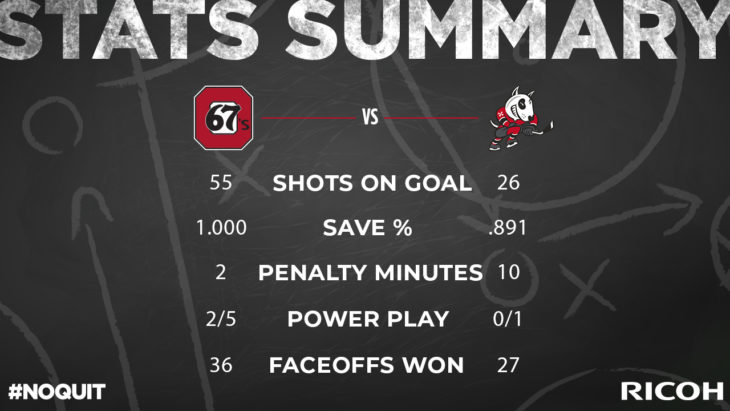