Your go-to spot for all information and updates for The 2021 IIHF Ice Hockey World Junior Championships. Bench Boss Andre Tourigny leads the charge for the Red and White while Equipment Manager Chris Hamilton will also represent Canada. Ottawa 67’s Assistant GM Jan Egert is also in Edmonton as he will be working with Team Switzerland.

Follow along for your World Juniors Watch powered by TELUS.

A silver lining to an unbelievable experience. 🇨🇦

Canada becomes one step closer as they take on Team Russia in the semi-finals tonight at 6pm.

GAME DAY! Canada and Russia face off in the semifinals at 4 PM MT / 6 PM ET. 🇨🇦🇷🇺 A ticket to the gold medal game is on the line! #WorldJuniors 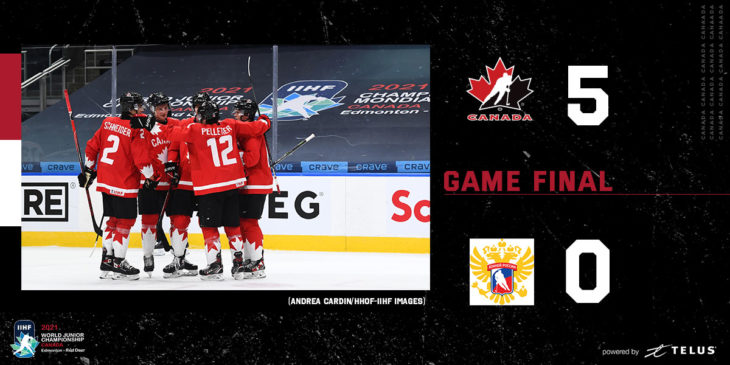 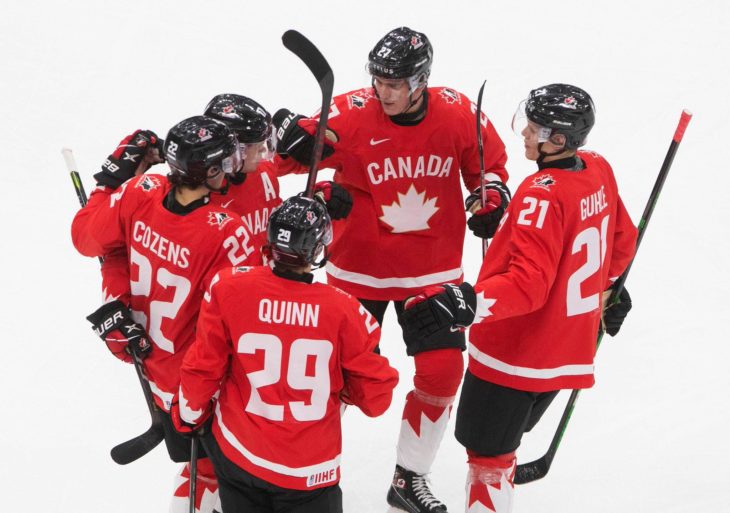 It’s GAME DAY!  Canada continues it’s road to gold with a quarterfinal match-up against the Czechs at 7pm. 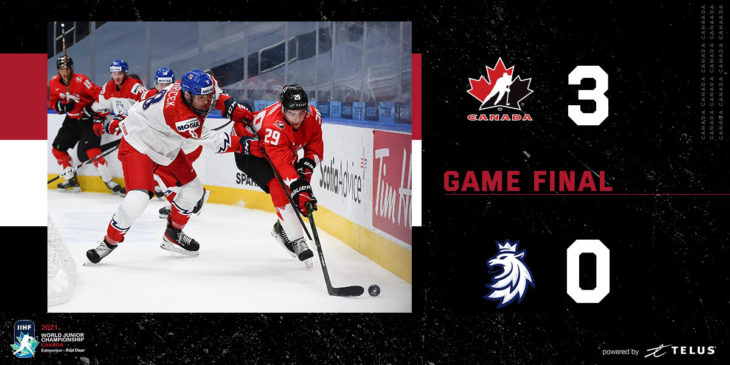 Ringing in the New Year the best way we know how, cheering on our players on the world stage.

Jack Quinn and Team Canada and Marco Rossi and Team Austria close out the year with games today.

Both Jack Quinn and Team Canada and Marco Rossi and Team Austria hit the ice in Edmonton.

Quinn had a beauty pass to Byfield for his second of the game! 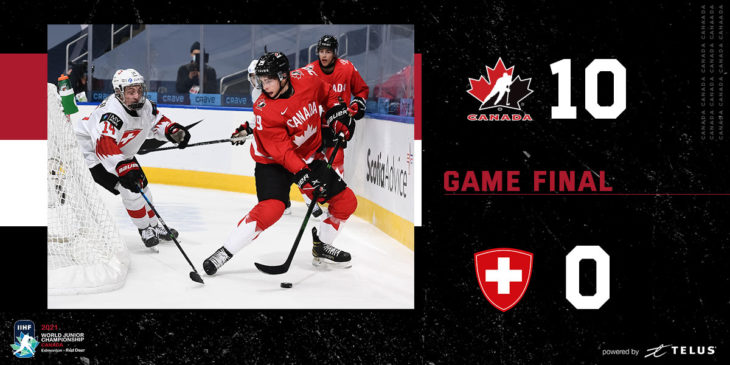 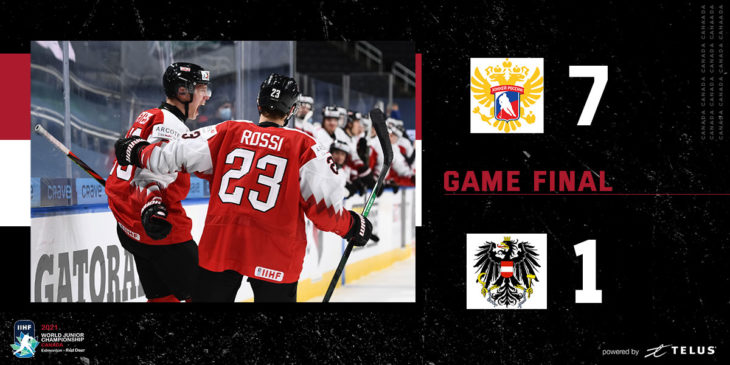 Team Canada faced off against Team Slovakia in their second game in two days. Jack Quinn sealed the deal with an empty netter in a 3-1 win over Slovakia. 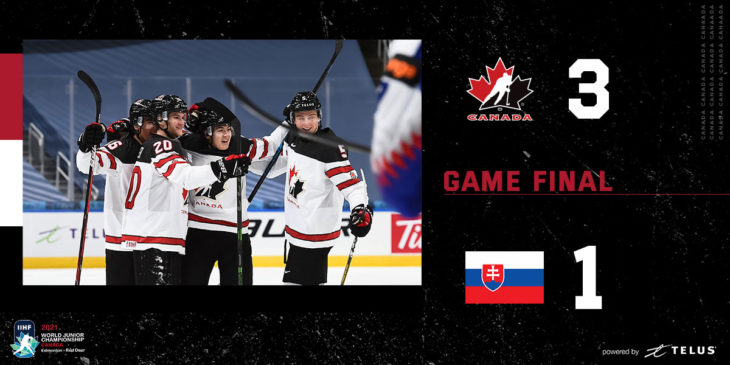 30 SECONDS ON THE CLOCK! An empty-netter seals it for @HC_WJC as @jackquinn_19 makes it 3-1. #WorldJuniors pic.twitter.com/ejgmpqYnjF

Catch Team Canada on Tuesday when they play Team Switzerland.

Marco Rossi and Team Austria face off against Team Sweeden at 6:00pm.

Mark your calendars and set your alarms, Team Canada kicks off their hunt for gold with back to back games this weekend.

Jack Quinn and Team Canada face Germany at 6:00 pm today and Slovakia at 6:00 pm on Sunday.

Marco Rossi and Team Austria hit the ice as they face off against Team USA at 9:30 pm. 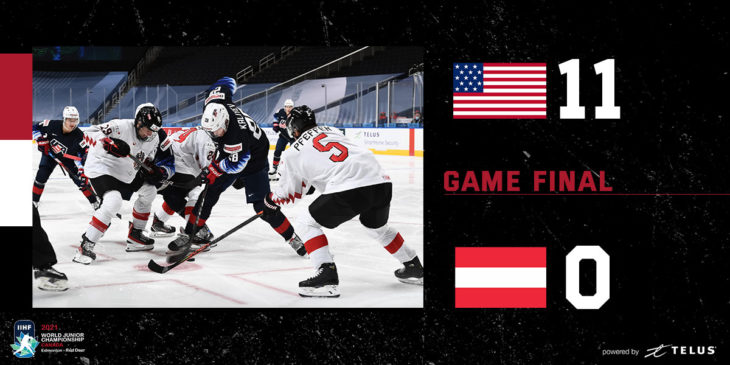 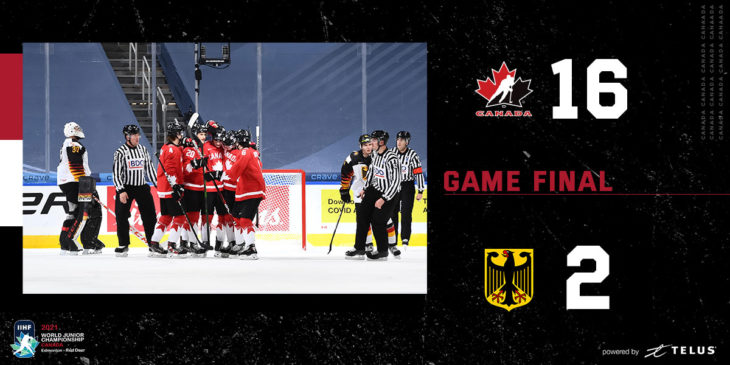 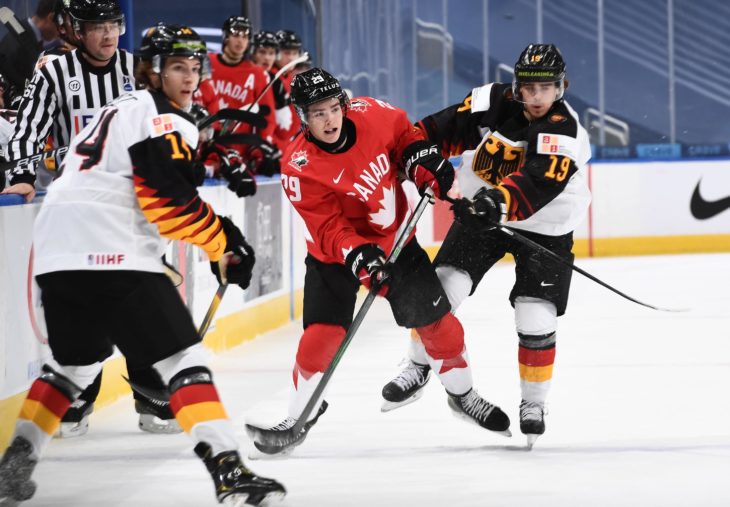 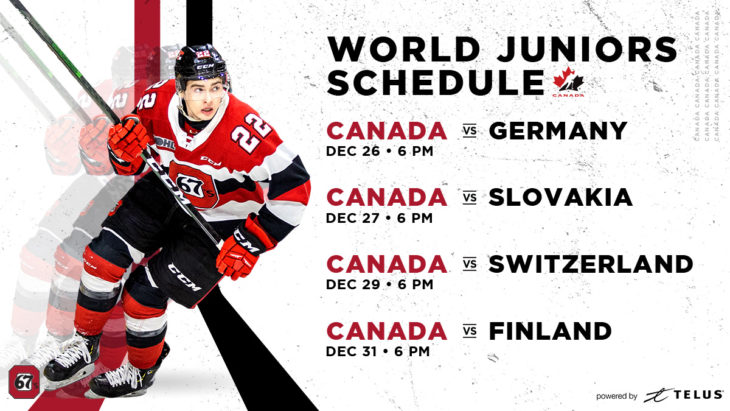 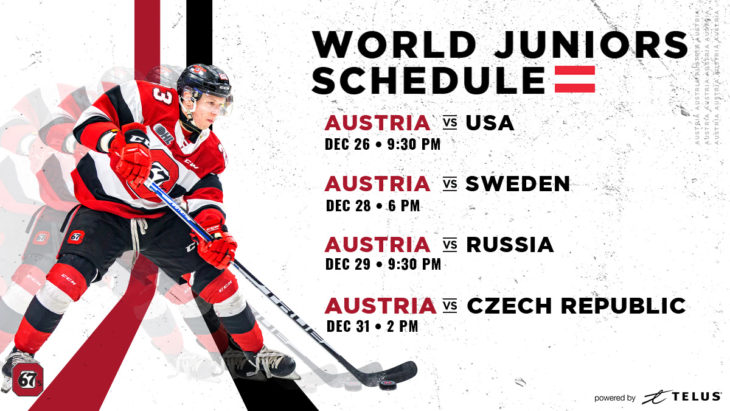 The Ottawa 67’s are well represented in Edmonton!

While the start to the OHL regular season is delayed, the Ottawa 67’s fingerprints are all over this edition of the World Junior tournament in Alberta.

Leading the way on the ice are two of the 67’s most dynamic players in Jack Quinn and Marco Rossi, who will suit up for Canada and Austria, respectively. The pair of 2020 NHL first-round selections are both to be taking on significant roles with their countries after dominating the OHL last year. READ MORE

All Teams Enter the Bubble

All World Junior hockey teams have entered the bubble in Edmonton before the tournament officially begins on Christmas Day. 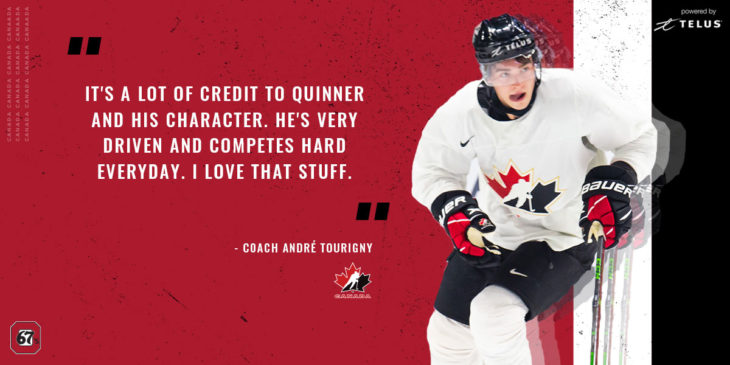 Ottawa 67’s forward Jack Quinn has been named on the 25-man roster that will represent Canada at the 2021 IIHF World Junior Championship in Edmonton.

“We are thrilled for Jack, who will be a valuable asset to Team Canada with his versatility and attention to detail, with which 67s fans have become so familiar,” said 67’s General Manager James Boyd. READ MORE 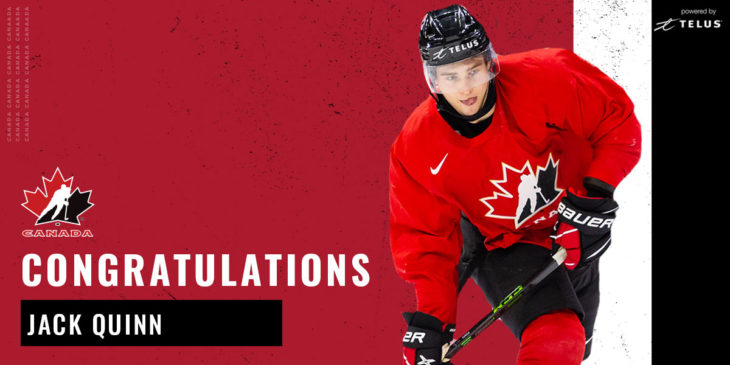 This is what it’s all about. #WorldJuniors https://t.co/GaCsMLm2W3

“I really feel for Graeme who by all accounts had a very solid camp after dedicating so much time to his injury recovery and lengthy preparation. We will continue to provide support to Graeme as we look forward to #67s training camp.” – GM James Boyd

We are always proud of Graeme Clarke.🙌 pic.twitter.com/D3swa9i3qh

Congrats to Marco Rossi who will represent Team Austria at this year’s World Juniors.

Our 67’s representatives finally set foot in Alberta for the start of Canada’s National Junior Team Selection Camp in preparation for the 2021 IIHF World Junior Hockey Championship. 67’s forwards Jack Quinn and Graeme Clarke arrived in Red Deer alongside 16 other OHL players who will battle for a spot on the Canadian roster from November 16 to December 13. READ MORE

Hockey Canada’s Selection Camp resumes after a 14 day quarentine. The 25 man roster will be announced on Friday, December 11th.

In Hockey Canada’s second Red vs White scrimmage on November 20th, it was Clarke vs Quinn, where both players found the back of the net during the game.

Nothing but high praises from Head Coach Andre Tourigny who knows his players well.

“Graemer is playing with a lot of confidence and energy right now. He has an assertive presence out there. It’s great to see him play at thos level after his injury last year.” 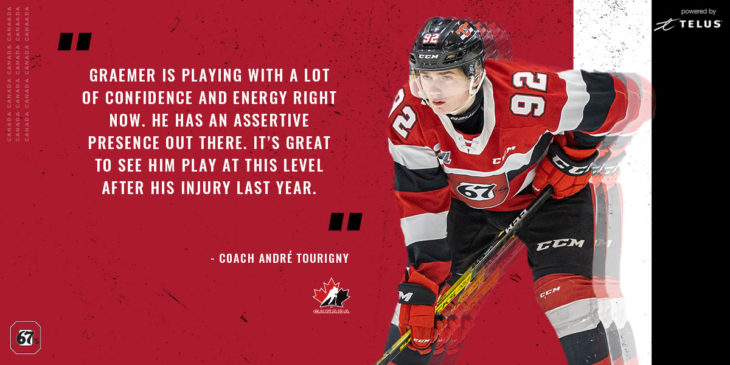 “Jack’s a hell of a player, I know him really well, I know what he can do.”

For @HC_WJC coach Andre Tourigny, there’s no mystery to what @BuffaloSabres pick and @Ottawa67sHockey 52-goal scorer Jack Quinn (@jackquinn_19) is capable of.

Jack Quinn knows what he has to do.#WorldJuniorsWatch powered by @TELUS. 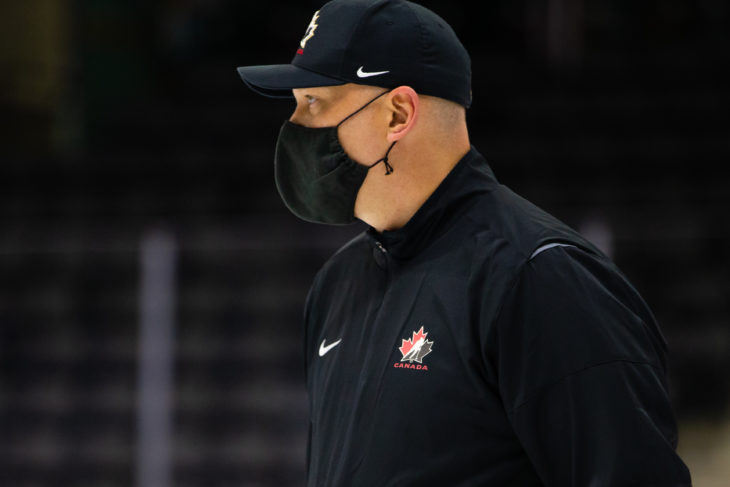 The Best of the Best

“The goal of the set-up is to make the rink feel like home. Make the rink ours. We also aim to provide anything and everything (which, as you would expect, is a lot of stuff) that players or coaches could possibly need.” – Hammy (read more)

Great job @35hamilton ! That reflect really well the professionalism and what you bring to a team. Proud of you and proud to have you as partner with @HC_WJC and with @Ottawa67sHockey #greatfamily #qualitypeople https://t.co/nygAUs0gBX

IN HIS WORDS | Chris Hamilton (aka Hammy) talks about the excitement of getting back into the team environment and what his day-to-day as equipment manager looks like.#WorldJuniors | https://t.co/rWO5fi5QHo 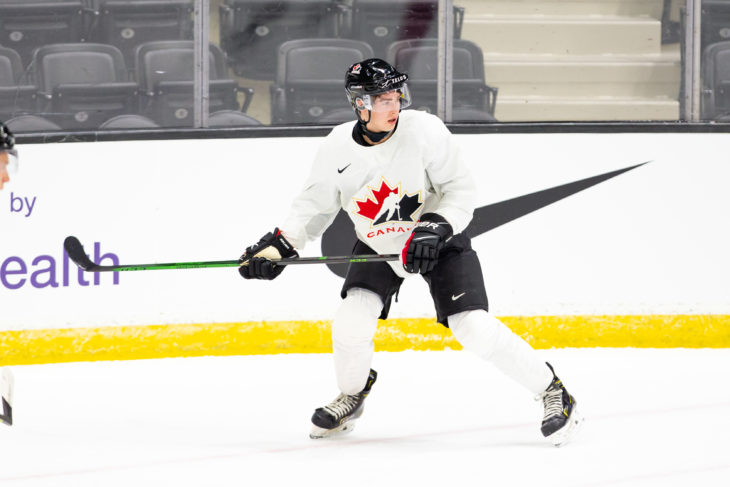 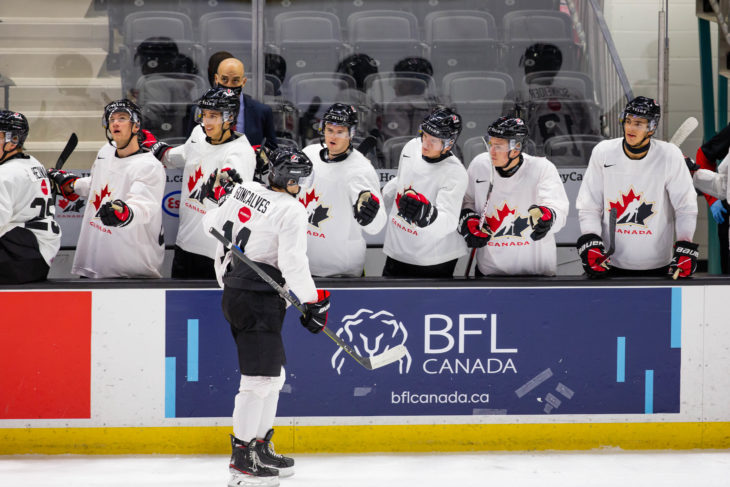 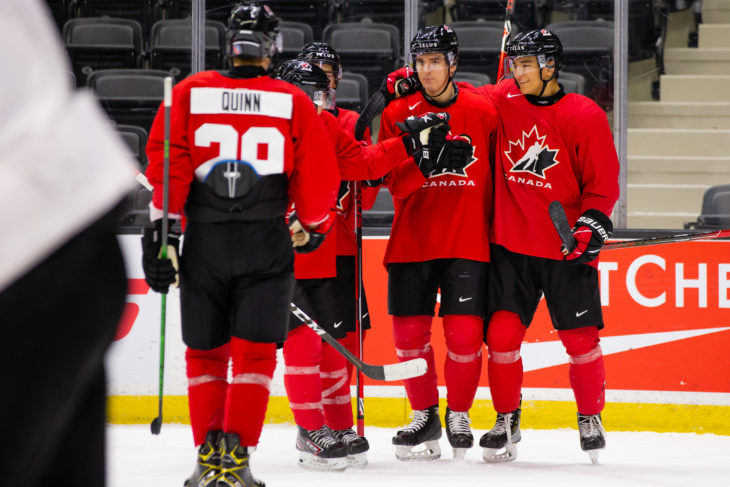 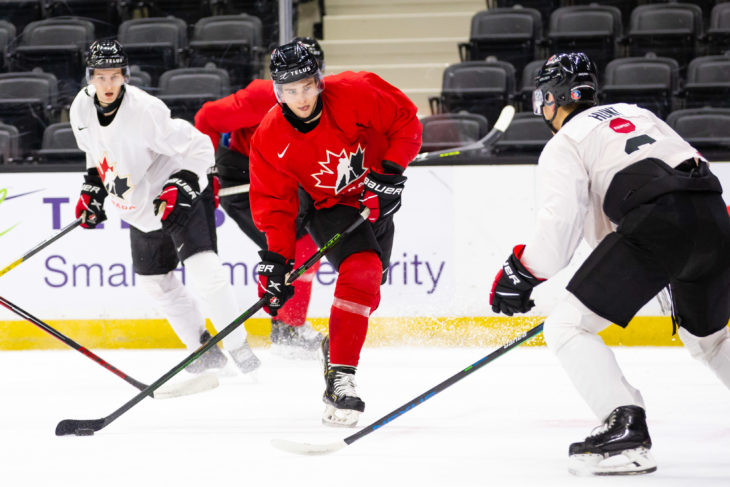